Understanding the Endocannabinoid System of Animals

Although it was once believed that only humans had an endocannabinoid system (ECS), we have recently learned of its existence in nearly all animals, including vertebrates (mammals, birds, reptiles, and fish) and many invertebrates (sea urchins, leeches, mussels, nematodes, and others).

Yes, you read that right. Almost every animal you could possibly think of has an endocannabinoid system. As far as we know, the only animal group found to be lacking this system are insects. So, what exactly are the implications here? Aside from the numerous veterinary possibilities, what this really means is that we’ve been looking at cannabis all wrong. It’s not just a drug that get’s us high, it’s a plant full of compounds that are much more interconnected to the natural, living world than we previously believed.

What is the Endocannabinoid System (ECS)?

The only reason cannabinoids even work and have an effect on so many different living organisms is because of the Endocannabinoid System (ECS), a system that was only recently discovered in March of 1992. Simply put, the ECS is a network of neurotransmitters and receptors that exists in the bodies of all animals. Cannabinoid 1 and Cannabinoid 2 receptors (CB1 and CB2) are found in the brain and nervous system, as well as in peripheral organs and tissues.

As a whole, the ECS regulates numerous different functions and processes in our bodies and maintains internal balance and homeostasis.

The ECS modulates the nervous and immune systems and other organ systems to relieve pain and inflammation, regulate metabolism and neurologic function, promote healthy digestive processes, and support reproductive function and embryologic development.

Researchers have discovered two different endocannabinoids so far, 2-arachidonoylglycerol (2-AG) and anandamide (AEA). 2-AG is made from omega-6 fatty acids and is present in fairly high levels in the central nervous system, but it has also been detected in human (and bovine) milk. 2-AG is a full agonist of both the CB1 and CB2 receptors, but it has a stronger influence over the CB2 receptor. Because of this, 2-AG is thought to have a substantial impact on the immune system. Anandamide (AEA), also commonly referred to as the “bliss molecule”, is known to play a major role in the in all our basic daily physiological functions including sleep/wake cycles, appetite, mood, and even fertility.

In addition to the naturally produced cannabinoids, there is also a large web of receptors that allow AEA and 2-AG to function the way they do. Again, the two receptors that have been studied most extensively are CB1 and CB2. These cannabinoid receptors sit on the surface of cells and monitor conditions on the outside. Once they sense changing conditions and the body falling out of a state of homeostasis, they signal the appropriate cellular response to restore balance.

Although there are two known endocannabinoids, one is by far more prominent in research and literature: Anandamide (AEA). The name comes from the Sanskrit word “ananda,” translating to “internal bliss, joy, or delight.” Anandamide is a fatty acid neurotransmitter that activates the same receptors as THC. The reason AEA is known as the Bliss Molecule is because of the role in plays in balancing our body functions and elevating our moods. Multiple studies have been conducted on the benefits of being exposed to varying levels of anandamide. 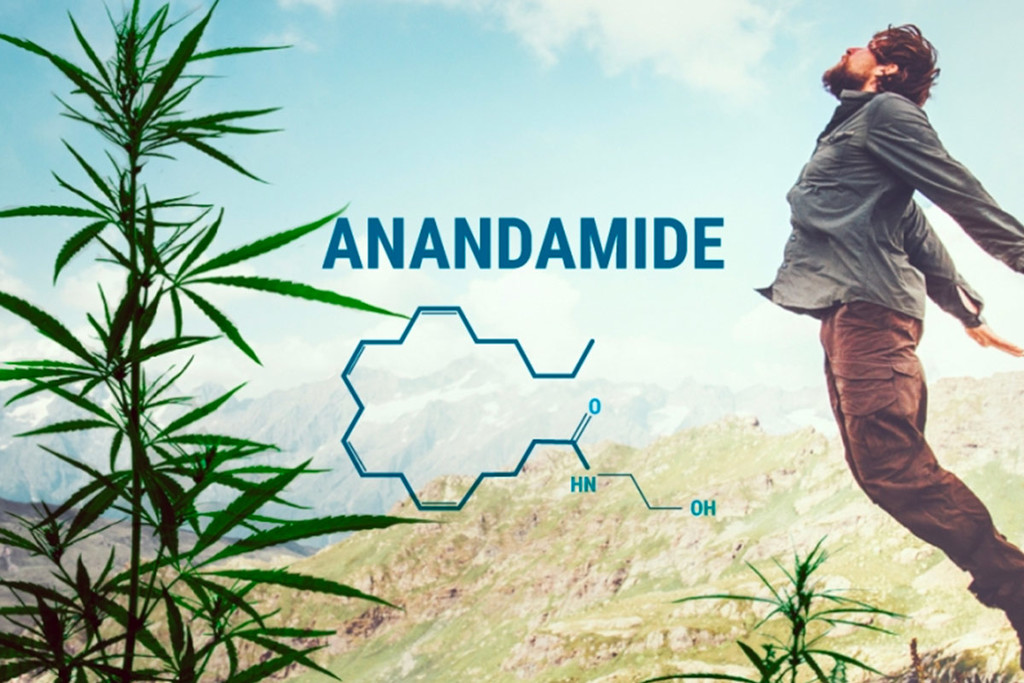 In 2015, a study examining both humans and rodents found that high levels of anandamide contributed to mood elevation and fear reduction. When the enzymes that break down anandamide were inhibited, the subjects felt less fear and anxiety where threats were perceived.

A 2009 study linked anandamide to fertility by showing that high levels of this endocannabinoid were not only beneficial, but essential for regular ovulation and proper fetal development. The study also concluded that higher levels of anandamide during times of ovulation contributed to a healthy and successful pregnancy.

A slightly older study published in 2004 found that increased levels of anandamide the bloodstream created a “euphoric high” in people who had just performed rigorous exercise or physical activity. This is frequently described as a “runner’s high” or “adrenaline high”, and it’s likely the reason why people who use cannabis often feel that it contributes to their workout.

Normally, anandamide is broken down by the fatty acid amino hydrolase enzyme (FAAH), at which point it is no longer in the body and thus, no more blissful effects are felt from this compound. Some people and animals produce less FAAH enzymes, and these people report feeling overall happier, experiencing less fear and anxiety than those who produce more FAAH. The same can be assumed for animals that produce less of this fatty acid.

We already face major limitations when it comes to the available studies and information we have regarding the endocannabinoid system in human animals, but when it comes other species, we know even less. One conclusion that researchers seem to agree on, however, is that regardless of species, the ECS seems to offer the same physiological and psychological benefits.

Research into the exact potential of the endocannabinoid system of animals is still ongoing. So far, the only species we do have minimal information on (aside from lab rats of course) is canines. This makes sense, considering that roughly 63 percent of American households own a dog, which is according to the Insurance Information Institute’s study on pet insurance policies. There is a bit of research indicating that felines absorb and eliminate cannabinoids differently than dogs, but that needs to be investigated further. 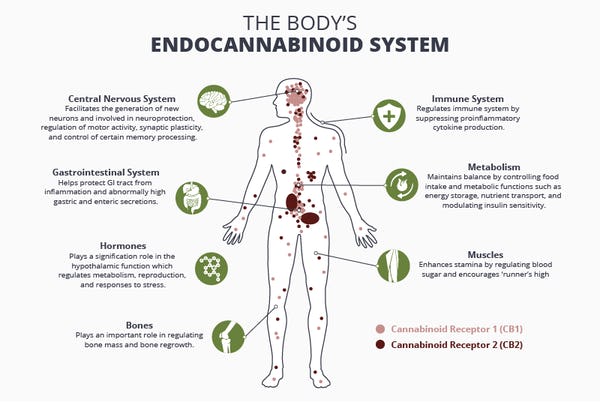 Although the basic functions of the endocannabinoid system are generally the same, there are some notable differences.

Mainly, in the protein sequence and distribution of the CB receptors. Binding affinities for the canine CB2 receptors have been measured to be about 30 times less than the ones in both humans and rats.

Simplified, that means dogs have not only a larger number of CB1 receptors, but they are much more active than human CB1 receptors.

This is significant because different cannabinoids bind to different receptors in the brain, so a dog’s experiences with cannabis could be much different than what a human would feel. For example, THC binds to both the CB1 and CB2 receptors, whereas CBD only binds to the CB2 receptors. This is why THC produces psychoactive effects, and the reason why dogs are more likely to experience adverse reactions from this cannabinoid.

Regardless, other cannabinoids, like CBD, CBG, and CBC could be wildly beneficial for our animal friends. Humans can experience a condition known as Clinical endocannabinoid deficiency, in which the body does not produce enough endocannabinoids. As a result, we fall out of a state of homeostasis, leading to the onset of numerous different diseases and disorders. It’s very possible that a lack of endocannabinoid production could be the root cause of health problems in other species as well.

It’s hard to say exactly how safe cannabis is for animals because we have very little definitive information on this subject to go by. In one particular study, it was discovered that dogs Compounds with psychoactive side effects in are typically not the way to go with veterinary species can suffer “Static Ataxia”, a neurological condition characterized by a change in gait and tremors.

But what is too high for a dog varies considerably from what is too high for a human, or even a rat, which shows that size of a species isn’t the only factor to look at when gauging toxicity. For a dog, exposure to doses over 0.5 mg/kg of body weight was too much was enough to trigger Static Ataxia. In states where cannabis products are more prevalent, there is a slightly higher rate of Animal ER admissions for THC toxicosis.

Cannabidiol (CBD), on the other hand, is a completely different story. According to a 2018 study conducted at Colorado State University, CBD is relatively safe when given at doses of 20mg/kg for six weeks straight to a subject group consisting of 30 healthy adult beagles.

Like other medications, there can be side effects. Mild elevations in serum alkaline phosphatase was noted in about 30% of the subjects, as well as occasional diarrhea.

Additional research from Cornell University found that ”once the right dosage is determined for a pet, cannabidiol can improve pain stemming from arthritis. In addition, some consumers have had success in using CBD oil for dogs to help relieve a variety of ailments.” In fact, this study found that more than 80% of participating dogs experienced a significant decrease in pain and noticeably improved mobility.

The future looks bright as cannabinoid research, in the post-cannabis prohibition era, is finally able to provide additional discoveries regarding the role the endocannabinoid system plays in the pathogenesis of disease, and the maintenance of health – for us as well as many non-human animal species.