Taking a Look at Cannabis and Mushrooms

Mushrooms and Cannabis: How They Compare and Interact

During the 2020 U.S. general election, as votes for president were still being tallied, the National Organization for the Reform of Marijuana Laws (NORML) declared cannabis (aka weed or marijuana) the overall winner.

Why? South Dakota, Mississippi, Arizona, Montana, and New Jersey all approved some degree of cannabis legislation.

Meanwhile, Oregon made history by voting in favor of Measure 109, which approves the use of psilocybin-producing mushrooms (sometimes called shrooms or magic mushrooms) in therapeutic settings.

With both cannabis and mushrooms becoming increasingly accessible, it’s more important than ever to understand their effects, both on their own and when used together.

Before decriminalization and legalization measures swept the nation, cannabis and mushrooms each featured prominently in counterculture, showing up in psychedelic art, music, and movies.

While the two substances share some similarities, using either one is a distinctly different experience.

The effects of cannabis can vary widely depending on several factors, including: 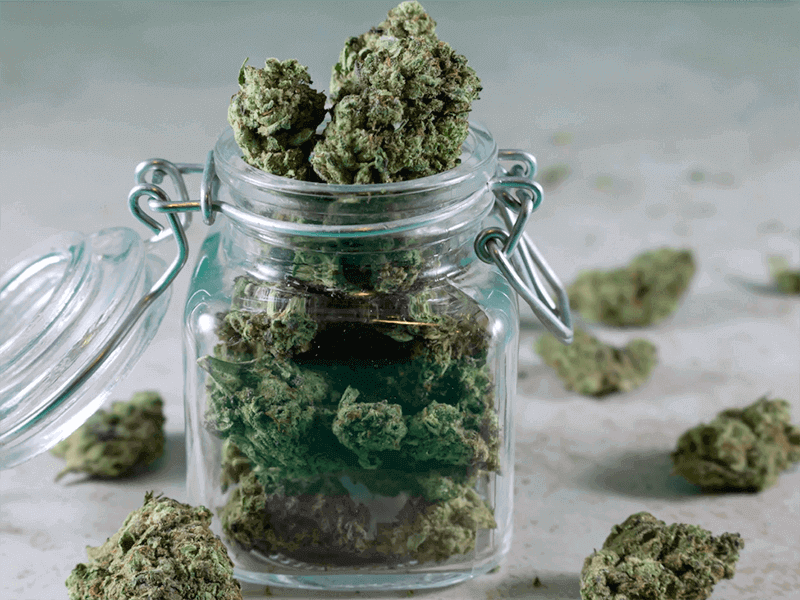 When smoked or vaporized, the effects rapidly kick in within minutes of use. The experience peaks at around 1 hour and dissipates within 2 hours, according to the Drug Policy Alliance.

Edibles take longer to kick in, usually 30 to 60 minutes.

Some people feel more focused and productive after consuming cannabis, while others feel more relaxed.

Other potential effects include:

While there are many types of hallucinogenic mushrooms, most are a variety of the species Psilocybe cubensis, which contains the psychedelic component psilocybin.

As with cannabis, mushrooms alter sensory perception. However, the effect is more striking. 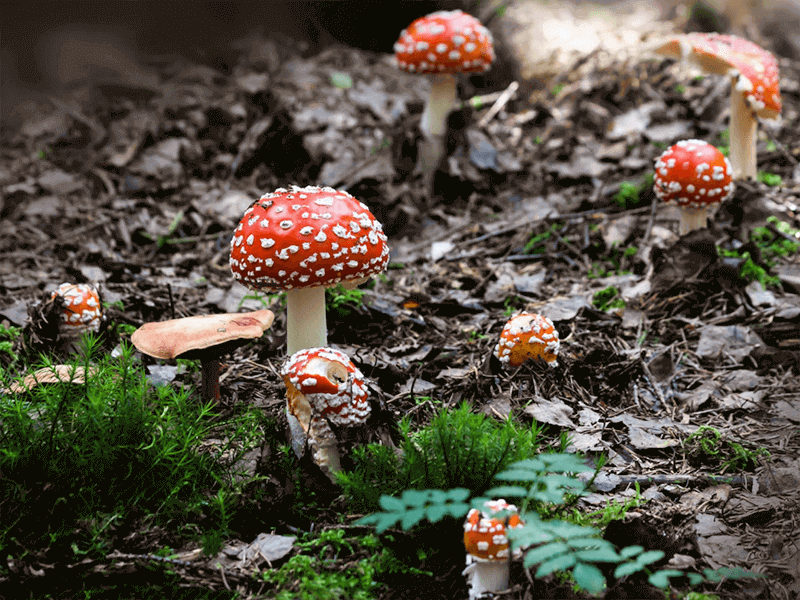 Mushrooms are usually dried and then eaten, steeped as a tea, or ground into powder that’s cooked into chocolates or placed in capsules. They can take 1 hour or more to kick in. The whole experience typically lasts 4 to 6 hours.

While people often think of mushrooms as opening up the mind, their effects are actually the result of the opposite process.

A 2012 study suggests that psilocybin decreases activity in areas of the brain responsible for constraining your experience of the world and keeping it orderly.

When this process slows down or deactivates, your perception of the world around you dramatically shifts.

For some, these effects can lead to spiritual epiphanies and philosophical breakthroughs. For others, they can cause discomfort or fear.

Other potential effects include:

Some people experience nausea (and sometimes vomiting) 30 to 60 minutes after consuming mushrooms, but this usually subsides after an hour or so.

Cannabis and mushrooms can both affect your perception of the world, but to different degrees. That said, the specific strain of cannabis or type of mushrooms you use can affect the experience.

Likewise, taking a low dose of mushrooms might feel similar to ingesting a small amount of cannabis.

According to online anecdotal reports, combining mushrooms with CBD-rich cannabis strains can reduce the feelings of nausea and anxiety that mushrooms cause for some people.

Meanwhile, combining mushrooms with THC-rich strains can increase the intensity of the trip. It may cause more interesting and intense visual and auditory hallucinations, as well as more intriguing thought patterns.

But the intensity may also be uncomfortable, especially if you don’t have much experience with mushrooms.

Cannabis Before a Mushroom Trip

If you find that cannabis helps with nausea or anxiety, using it before consuming mushrooms may help ready your body for the trip.

But if you’re new to mushrooms, it’s best to avoid using cannabis first so you can get an accurate read on how mushrooms affect you.

Cannabis During a Mushroom Trip

When used around the time the mushroom’s effects are peaking (around 2 hours after initial consumption), cannabis can add to the overall intensity of the experience.

When used 3 to 4 hours in (when the effects of mushrooms begin to fade), cannabis can slightly prolong the experience and help you contextualize the experience as a whole, according to anecdotal reports.

Combining cannabis and mushrooms doesn’t appear to pose any serious health risks. Their interactions haven’t been studied much, though.

The biggest concern is around having an uncomfortable time, especially if you don’t have much experience with either substance. That’s why it’s best to stick with one or the other, at least until you know how your mind and body react to each substance on its own.

The best way to ensure a safe psychedelic experience is to be mindful of your set and setting:

For example, if you’re already feeling sad and you take psychedelics in an unfamiliar place or with people you don’t trust, you might have a negative experience.

Make sure you’re physically and psychologically comfortable before you begin. Consider enlisting a trusted friend to remain sober and sit with you in case things take a turn.

Here are a few other pointers to keep things safe and comfortable:

If you have a history of mental health conditions, proceed with caution.

While the use of psychedelics for managing mental health symptoms is gaining popularity, there’s a lot we still don’t know. For some, cannabis and mushrooms can make symptoms worse.

Often, a bad reaction simply involves anxiety and paranoia, which hallucinations may make worse. Most of the time, the presence of a sober friend or “trip-sitter” is enough to manage these effects.

A trip-sitter can provide gentle reassurance that the reaction is due to the substances you took and that it will pass. They can also change the setting by guiding the person having a response into a quiet space with soothing colors, music, and aromas.

Removing mirrors from the space sometimes reduces the likelihood of having alarming hallucinations.

If the person having an adverse response is able to eat and drink, offering a small amount of food and water can reduce the effects’ intensity.

When to Call for Help

It’s time to call for emergency help when someone:

If you’re concerned about law enforcement getting involved when calling for help, you don’t need to mention the substances used over the phone. Just be sure to tell them about specific symptoms so they can send the appropriate response.

If you’re caring for someone else, get them to lie slightly on their side while you wait. Have them bend their top knee inward if they can for added support. This position will keep their airways open in case they begin to vomit.

Used separately and together, mushrooms and cannabis can spark creativity and new perspectives. But this combo can also be uncomfortably intense for some and worsen mental health symptoms for others. 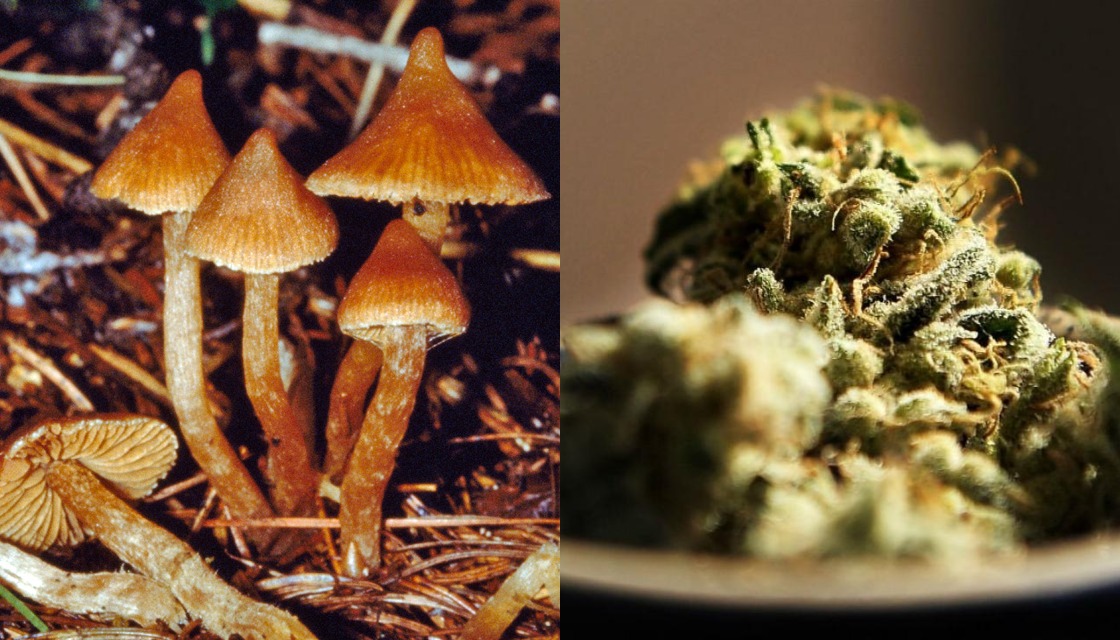 As the call for decriminalization and legalization spreads from cannabis to psychedelics, the opportunities to practice responsible adult use are increasing.

Educate yourself about the benefits and risks of using these substances, keeping in mind that people can have very different experiences with them.

It’s also wise to remain aware of the degree in which your use enriches your life rather than impairs your life.

If you ever feel like your substance use has crossed the line to addiction, a comprehensive list of resources is available online here.