Getting to Know Cannabis Plant Anatomy

Having a Healthy Relationship with Cannabis Requires Familiarity with its Anatomy. Non-Growers who Smoke may Find Their Experience Enhanced by this Knowledge as well. 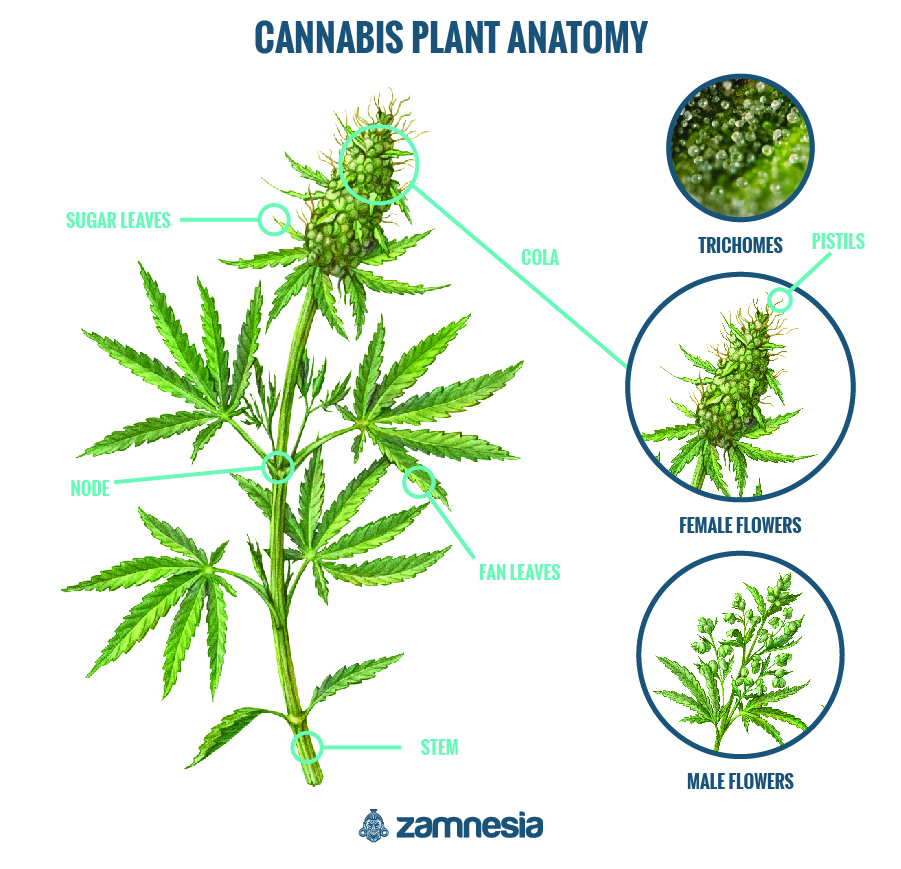 Knowledge is power and any grower worth their weight in salt (or bud) should have a decent working knowledge of cannabis anatomy. Knowing the function of each plant part, its psychoactivity, and its relationship to the other parts of the plant is of utmost importance.

The female cannabis plant will be our main subject of investigation because it brings forth the buds which we have treasured for millennia, but we shall also mention males and hermaphrodites.

The male plants need to be detected quickly and removed before they pollinate the females and lower the quantity and quality of the buds.

The sex of the plant starts showing within the first 2 weeks of the flowering period.

There are also hermaphrodite plants which are both male and female. The plant can become hermaphrodite due to genetics and environmental stress. These plants can pollinate themselves, which is not desired because of the destruction of perfectly potent buds.

Alright so let’s dip into the female plants. The cola is the topmost part of the plant, where the buds come together to form a mass. It’s the part that you smoke. The cola is also called the “terminal bud”.

The side colas grow along the length of the plant, between the fan leaves. They are usually smaller than the terminal cola, although they can be enlarged by methods such as LST (Low-Stress-Training) and ScrOG (Screen Of Green). These techniques provide higher amounts of light for the buds, which makes them bigger.

The number of “terminal” colas on a plant can be increased by various plant training techniques. These include: topping, where the topmost growth is cut off; screen of green (ScrOG), where the plant is grown through a mesh screen; low-stress training (LST), where branches are bent and tied. This means multiple colas will be located at roughly the same height.

The calyx is the actual flower of the cannabis plant, and it’s beautiful. Next time you look at your bud, notice the tear-shaped nodules that hide between the small “sugar leaves”, yepp, those are calyxes.

Of all large parts of the plant, they’ve got the most of what gets you high. They’re the part of the bud that’s richest with trichomes and their accompanying terpenes and cannabinoids like THC and CBD. They can also have different shapes, depending on the genetics of the strain.

What are these strange cool-looking hairs coming out of the calyxes? Those are pistils. They can be white, yellow, amber, or brown in colour, depending on the maturity of the plant. First, they are white and stiff, then they start bending a little, afterwards they turn orange and then brown. The pistils are responsible for capturing the pollen from the male plants, which will eventually create the seeds.

Common stoner wisdom has it that buds rich in styles are of higher quality, but in reality they don’t contain trichomes and have little effect on the high.

Styles are the clearest and earliest indicator of a plant’s sex, as they don’t appear on a male. They are also a clear indicator of when your bud is ready for harvesting—you’re waiting for the moment when 50–80% of the styles have turned yellow or amber in colour. If you wait too long and they turn brown, your weed will lose its flavour and potency.

This is where the magic happens! The queen of all components are the trichomes. Trichomes are tiny resin glands that are shiny to the eye and sticky to the touch. “Trichome” comes from the Greek word for “growth of hair”. They contain a high level of THC, cannabinoids, and terpenes.

The type and concentration of trichomes on a plant will determine the strength, flavour, and effects of the resulting cannabis. Trichomes appear all over the plant, but are by far the most abundant and psychoactive on the cola, particularly the calyxes and sugar leaves.

The trichomes change size and color during the maturation process. In the beginning, the trichomes are very small and clear and look like small glass orbs, something Merlin would use to summon magical creatures. Then they become longer, like a stem of crystal with the glass orb on top. Further into the flowering process they become smoky, cloudy and then amber.

So we know what trichomes do for us—but what good are they for the plant? Female cannabis plants can be vulnerable to insects, animals, and the elements, and trichomes act as a defence mechanism. Their sticky texture and strong smell ward off pests, hungry animals, and can also protect the plant against some fungi.

Sugar leaves are small leaves appearing on the cannabis cola. They’re called “sugar leaves” because they’re covered in a rich layer of trichomes, giving them the appearance of being coated in sugar!

The density of sugar leaves will vary by plant—this mostly depends on genetics. Sugar leaves can be smoked, though they’ll tend to be weaker and harsher than other parts of the cola.

Still, if you only have a few, the benefits of leaving them in the mix likely outweigh the cons. Alternatively, they can be used to make excellent edibles and hash.

Whether male, female or hermaphrodite, these big leaves grow along the length of the plant. Fan leaves are the iconic “five-fingered” leaves found on baseball caps and t-shirts around the world.

In reality, these leaves can have many more than five fingers. They provide the plant with large amounts of energy from the light. Their main role is to transform sunlight into glucose through photosynthesis.

As fan leaves provide the plant with its energy, you’ll generally want to avoid pruning them unless there’s good reason to do so.

The fan leaves of an indica tend to be darker in colour with broader fingers, while those of sativas are a lighter green with narrower fingers. The fan leaves can be juiced down, many say that they deliver fantastic health benefits. Fan leaves don’t contain any significant amounts of THC, therefore they are usually not consumed by the “high” seekers.

The stem provides the cannabis plant with structure and stability and supports its weight. It’s also responsible for nutrient transport as it contains the water and nutrient-carrying xylem cells, and the sugar and starch-carrying phloem cells.

In the male plant, stems can be an abundant source of fibre. In female plants, the stem can support some trichomes, and so they’re often mildly psychoactive.

Weak, low-quality weed is often derisively referred to as “just stems”. Some users use their stems to make edibles, bubble hash, hemp string, and hemp paper.

The stem of the cannabis plant is divided by nodes, which occur where the plant branches. In immature plants, nodes will develop in paired opposites, but as the plant matures, nodes will alternate along the length of the stem. Nodes are the first place where cannabis flowers appear, so they’re essential for determining an unknown plant’s sex.

In sativas, nodes tend to be further spaced out than in indicas. Nodes produce much of a plant’s hormones.

When a plant is grown from a cutting, it’s important to include at least one node in the cutting so it can produce auxin, or rooting hormone, which prompts root development.

A ganja scientist can probably name hundreds if not thousands of small particles that constitute a cannabis plant (a trichome itself can be divided into eight parts or more!), however, the aforementioned components are the most good-to-know for anyone that likes to enjoy their magical buds.

Stock up on beautiful buds for your special someone or yourself!  Fresh new strains Orange Cookies and Monster Cookies are available along with the classic pinks and purples Buddies is known for.

Also don’t forget that today February 12th is Shatterday so you can use promo code BUDS15SHATTERDAY for 15% off all shatter including Nude Extracts, BLACKMARKET and new strains of CRFT Cannabis shatter. All day until 11:59pm pacific time, receive 15% off all shatter on top of the already low bulk pricing tiers!

Have a good weekend buddies!