Facts You Should Know About Shatter

Shatter is a Brittle, Glasslike, High-THC Cannabis Product that Tends to Break Apart When Handled; Hence the Name Shatter.

That term derives from its fragility – like broken glass, but without the dangerous edges.

This particular type of extracted concentrate is preferred by many because of its ease of handling when used for dabbing. This requires a lot of subtle purging to remove all the solvents properly that is used in the process of production.

Live rosin can be pressed at home using a simple device without solvents, but the texture is oily rather than buttery or brittle.

Shatter is a type of cannabis concentrate extract that is made or produced by combining plant materials and solvents. It appears to be translucent; the colour type can be anything from honey-like bright or dark yellow and even like the colour of olive oil.

Taking a look at the visual perspective of different kinds of shatter, they look like they have the same type of consistency however.

The texture and physical consistency of each product can range from extremely fragile to something like taffy with a snap or stretch quality. These characteristics give some insights into where the individual products are situated in the cannabis profile.

Essentially, if shatter has higher ratios of ∆-9 THC, it will be sappier than a product with high levels of THC-acid, normally known as THCA, which is essentially the most delicate form of shatter. Under normal room temperature, THC is like a thick oil, giving high THC concentration and a viscous consistency. On the other hand, THCA in room temperature is solid and yields a fragile concentrate that is easy to break apart.

Shatter is best known for varieties that have THC at very-high levels. Any number of the companies making concentrates also make a type of shatter with high-CBD and low-THC. That being said, the CBD form is normally made for consumers who need the medicinal benefits from cannabis, without the psychotropic effects of THC.

Since this product contains a concentrated dose of CBD it can be good medicine for marijuana patients who are interested in staying clear and functional while getting better and healthier.

Let us go back in time before the Canadian cannabis & marijuana industry was legalized. The products were limited, mainly dominated by hash as well as flowers and a few other things. They were homemade concoctions that were traded with patients who wanted better medicine, and every so often a home butane extraction lab would blow up and catch fire. 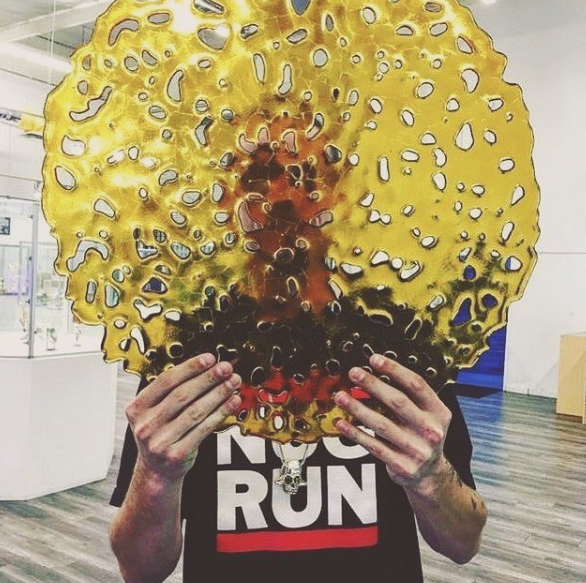 After two decades those days are now history and long lost memories in Canada, although still a problem in parts of the USA. Now many Americans can walk down to a retail store and see shelves filled with concentrates in bulk. This would feel alien-like to the old school cannabis lovers. Today the consumers seek cannabis products like shatter, and other products like wax or live resin, we will talk about in this article a little later.

These marijuana and cannabis ‘concentrate’ products have a similar potency but are extracted using a much more fascinating high-tech mechanism or process. Butane Honey or better known as BHO was just the start, nowadays preparing concentrations to require gas as well as liquid chromatography along with mass spectrophotometry and other lab-based technical processes. Remember, this also requires highly trained and certified lab technicians.

Confused? Don’t be, we already have discussed shatter, now let us understand the other types of concentrates that are derived out of cannabis.

It is also popularly called budder as well as frosting, it has a softer consistency as compared to shatter. This concentrates texture can range from being a soft icing budder or creamy wax to something similar to a sticky candle.

Similar to shatter, this is also produced through a similar solvent-based process. The key difference in consistency appears in the final stages of the extraction process.

Wax has a creamy consistency as if it was whipped, simply because they are agitated while they enter the cooldown stage. The whipping process that is done for several hours after extraction helps in evaporating the moisture, solvent molecules, and also helps in preserving more terpenes as compared to the shatter production process.

As the taste of the consumer has developed in this new cannabis industry, so has the extraction process. HTFSE, which is an abbreviated version of High Terpene Full Spectrum Extract, has heightened the demand for rich flavours. The traditional extraction methods waste most of the volatile terpenes through the harsh process.

HTFSE is the new process of extraction that is technically focused on Terpene conservation rather than the potency of cannabinoid.

This concentrate has more to do with the original material of the plant rather than any of the above extraction processes. The forms of concentrate come from the dried plant material that has been cured or preserved. But this comes from the fresh and the instantly frozen materials of the plant. These are harvested when the potency is at the maximum or peak, the instant freezing of the fresh plant materials helps to lock the volatile terpenes as well as the cannabinoids that are lost due to the curing process. Since they are high on the terpene content these resins are called HTFSE.

This extraction has many shades to it, however, it is again to preserve the terpene. Popularly called the “terp sauce” or “diamonds”. The name sauce is given because of its consistency; it is liquid-like or let us just say sauce-like. Depending on which stage the extraction happens, this may also have some crystal-like structure called the THCa, and hence the name “diamonds”.

This sauce has HCFSE and HTFSE, however, these can be simply individual components that have been broken down. Its extraction is also a solvent-based process at low temperature.

Using techniques to adjust the temperature or a simple centrifuge, the producers can extract the pure form of terpene sauce from the cannabinoids diamonds. It can be sold as a concentrate or separately as crystals and sauce.

Finally, as the tastes of the consumers evolve and with the advent of technology that allows even better precision extraction, the process gets better and the products get potent to as high as 90 percent.

The taste buds prefer flavours, given the history and the current trend, it will be interesting to see what the future holds.

Enjoy 15% Off All Shatter with Code BUDS15SHATTER Every Friday!

1 thought on “Facts You Should Know About Shatter”