From Shatter to Resin to Wax, Let’s Explore What and How to Dab

If you used marijuana ‘back in the day’, the sheer range of options available today may seem overwhelming. Once upon a time, you had the option of smoking a joint or eating a hash brownie. These days, there are various tinctures, ointments, and gummies laden with cannabinoids. However, dabs are a form of weed that’s gaining popularity as fast as anything on the market.

Weed dabs, a type of marijuana concentrate, are essentially an extracted form of dry herb which you can smoke or vaporize. Although you can learn how to make dabs with weed, it is often best to purchase concentrates from a reputable seller. Also, as the THC content can be as high as 80%, we urge you to moderate your use at first and watch out for any dabbing side effects.

In this guide, we tell you what weed dabs are, how to make weed dabs, how they work, and provide you with a brief history of dabbing.

What Are Dabs and How Do They Work?

If you decide to dab, you may have to purchase some extra equipment. While you can use a normal weed bowl for dabs, it is best to buy a specific dabbing rig.

When you dab, you are placing a concentrate on a hot surface and inhaling the vapor that is created when the substance evaporates.

Dabs are the cannabis concentrates left over when all of the cannabinoid material has been removed from the weed. Some manufacturers use butane, alcohol, ethanol, or carbon dioxide as solvents to break down the plant. When you use a rig for dabbing, you will get the very best out of your concentrate. Here is a quick look at the devices you can use when dabbing:

Also known as a dab rig, this is the classic piece of dabbing equipment. It is a water pipe specifically designed for concentrate use and consists of a nail, dome and holder. You place the concentrate in the holder, heat the nail with a torch and set the dome in place. Once the red-hot nail makes contact with the concentrate, vapor is created, which you then inhale.

There are also all-in-one rigs known as domeless nails, which are essentially the same as typical rigs, the main difference being that you don’t have to remove or replace the dome.

There are various forms of vaporizer, ranging from expensive desktop models to cheaper vape pens. Regardless of the type of vaporizer, they all have a heating element that heats the concentrate to the correct temperature. They are best used with wax, shatter or oil.

These are designed to combine the benefits of water pipes and vaporizers. You load the dab in an atomizer and the battery heated device warms the concentrate to the point where it gets vaporized. Then, you inhale the vapor like you would from a water pipe.

Where Do Dabs Come From? A Brief History of Dabs

Not to be confused with the ridiculous dance of the same name, it’s believed that THC-laden concentrates have actually been used for at least 2,000 years.

Most experts now believe that the “dab” originated in Eastern Asia before spreading to Nepal, India, and the Himalayas back in 100 AD.

In the modern era, a group known as the Brotherhood of Eternal Love (based in California’s Orange County), began using Butane Hash Oil (BHO) extractions in the late 1960s. This concentrated form of weed was also known as Honey Oil.

However, the first proper dab rigs were not created until the 21st century. Some sources suggest these rigs were created as early as 2005, but most weed historians suggest the first true dab rigs were not available until 2010. California is sometimes called the home of dabbing and today, hundreds of thousands of people are getting their cannabinoid dosage in this manner.

Do Dabs Get You Too High? Will They Cause You to Fly?

There is much debate about how a dab fares against a weed high. A lot of users believe that dabs don’t get them high for as long as weed. As a result, they make the mistake of using excessive concentrates and pay a very severe penalty. One of the chief benefits of dabbing is that you can control the dosage. Concentrates are also a good option if you have developed a tolerance for dry herb.

The best way to get high from weed OR dabs is to be sensible and experiment with a low initial dosage. This is especially the case for concentrates, which are significantly stronger (up to four times) than dry herb. The best practices for getting high with dabs include:

The entire dabs vs weed high debate has been raging for the last few years. There is definitely a difference in the high with dabs versus weed, but one is not necessarily ‘better’ than the other.

The classic ‘smoking a joint’ method is still a popular way to get high. It is easy to determine the dosage and you can decide which marijuana strain you want depending on its THC or CBD content.

Up to 60% of the THC in a joint can get into your blood plasma and you benefit from peak concentrations within 10 minutes.

However, even the strongest strains on the market seldom go above 25% THC. There are concentrates available for sale, with THC contents ranging from 70% to 90%! In fact, it is so powerful that some users have been hospitalized due to the hallucinogenic effects. The lack of combustion however (because you vaporize it) means it should theoretically be easier on the lungs than smoking weed.

How Much Dabbing Can You Take?

While different extracts have varying THC concentrations, it is important to note that even relatively weak dabs are far stronger than dry herb. We recommend using the smallest crumb of concentrate as possible when dabbing for the first time. It may look like a tiny dose, but trust us, you don’t need much to dab your way to an intense high. In simple terms, an 80% THC wax is eight times stronger than 10% THC dry herb, although there are other factors that impact this ratio.

The simple answer is: yes, they should be. Top-shelf dabs’ flavor will taste like the marijuana strains they are extracted from.

Dabs can sometimes taste like vaporized weed, and they should always have a taste like weed. Here are a few things to look out for when sampling dabs:

How Much THC Is in Concentrates?

This depends on several factors, but the general number tends to range between 70% and 90% THC. As we mentioned before, there is a HUGE difference in terms of THC percentage in dabs vs weed. Even the weakest THC count in dabs are almost triple the potency of the strongest marijuana strains.

It is advisable to begin with dabs in the 70% range and work your way up. If you’re an experienced user, you will be delighted to learn that there are dabs with over 90% THC in certain locations – premium Solventless Strawberry Cough has a THC content of 92.92%, for example. If you live in California, you can find Clear Concentrate’s ‘The Clear’, which contains up to 96% THC.

What Is the Difference Between Herb & Dabs?

Concentrates are extracted from the marijuana flower and are significantly more potent than dry herb. You can purchase shatter, wax, crumble, or oil, and use a dab rig or vaporizer to consume it. 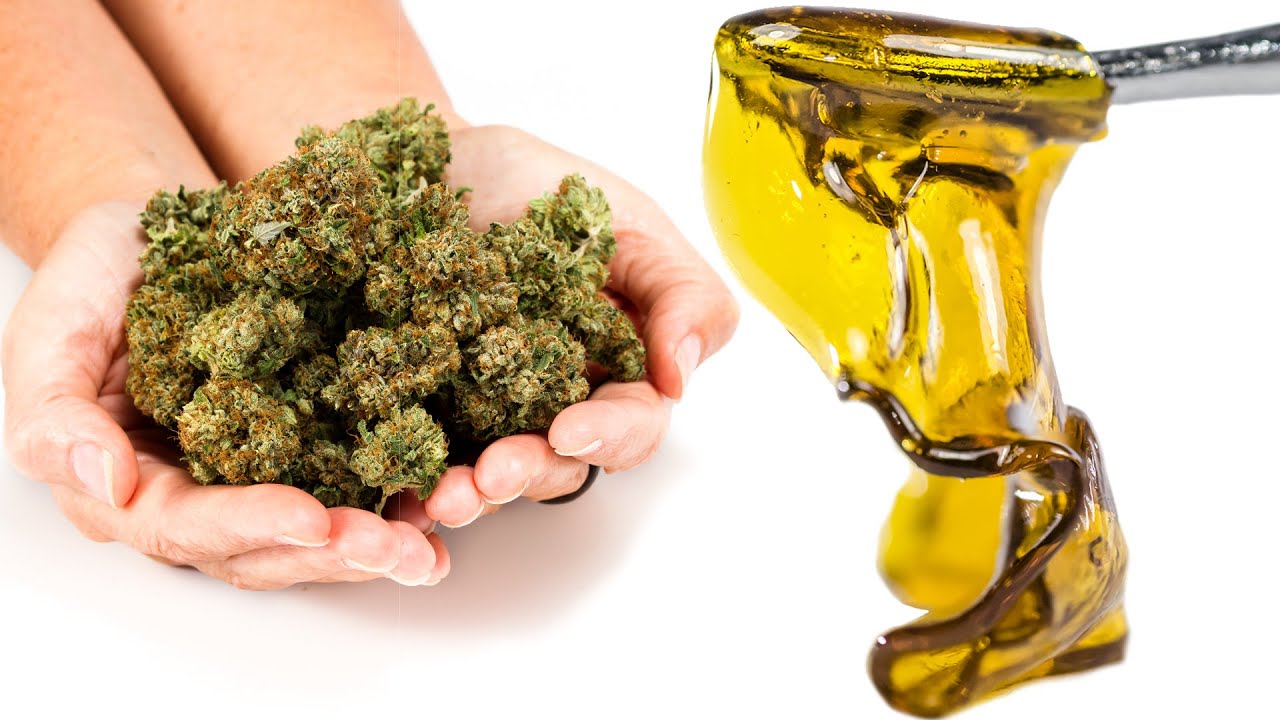 Some users like to roll some dab on their joint for an extra kick. If you use a rig or vape device, you inhale the vapor, whereas smoking weed combusts the plant matter and is harder on the lungs.

Although cross-breeding has created some potent flower, the effect of dabs is far stronger versus those provided by weed.

In the ever-looming dabs vs weed debate, both sides make pretty good points. Let’s take a look at the pros and cons of dabs when compared to dry herb:

There is no clear winner in the dabs vs weed competition that everyone appears to be talking about. What we can tell you is that dabs are incredibly powerful and we are edging closer to the day where someone creates a near 100% THC concentrate. Federal law enforcement officials say that dabs are on their radar because of their high strength, so we have to hope that the current administration does not make a move to ban the substance completely.

Concentrates offer a fast and potent way to consume marijuana and these weed dabs are becoming bestsellers. It is up to you to decide if you want wax, oil, butter, shatter, or resin to dab with. We also recommend paying for a high-quality dab rig or vaporizer to get the very best out of your concentrates. Please be careful when using dabs, because they are far more potent than anything you have ever tried before.

Article by Nicole Richter from Way of Leaf.

Enjoy 15% Off All Shatter with Code BUDS15SHATTER Every Friday!