Some researchers believe cannabis can help wean prescription opioid users off the addictive and potentially deadly drugs. Others aren’t so sure.

For years, Tim Gresh took dozens of prescription opioid medications per day, seeking any relief for the debilitating back pain that he – no matter which medication or therapy he used – could just not shake. “It shattered my whole life,” the Windham resident said.

The medication left him sluggish, trapped in a mental fog for days at a time. He said his life was a “disaster in slow motion,” and it seemed like there was no way out.

That is, until a “forward-thinking” primary care physician suggested medical cannabis for his chronic pain, which Gresh, 54, said set him on a new path that has changed his life for the better and helped him stop using virtually all drugs classified as highly addictive. “I never thought that would have been possible,” he said. Gresh has joined a growing number of patients who swear by medical cannabis not only as a treatment option for chronic pain, but also as a substitute for prescription opioids used in pain management.

In the past few years, more researchers have started studying this possibility, but their work has yielded different and often contradictory results.

Since 2015, the National Institutes of Health’s National Institute on Drug Abuse has funded research surrounding the therapeutic benefits of tetrahydrocannabinol (THC) and cannabidiol (CBD) for the treatment of pain as an alternative to opioids, addiction and other disorders. THC is the main psychoactive compound in marijuana, while CBD is a non-intoxicating cannabinoid found in the cannabis plant.

Spending on such studies has more than doubled since then. In 2015, the institute devoted $21 million to the research. It’s estimated that 2020 spending was about $48 million.

Gresh is under no illusions that his pain is cured, but he said using marijuana has improved his quality of life. “Every day is different, (but) at this point I’m at least present,” he said. “I’ve found strains of (cannabis) flower that cut the pain flares in half. It doesn’t go away, but it becomes manageable.”

A 2017 review of existing studies by researchers Suzanna Nielsen of Australia’s University of New South Wales and Michael Farrell of the country’s National Drug and Alcohol Research Centre suggested that when co-administered with opioids, cannabis may enable reduced opioid doses without decreasing the pain relief.

However, the results were ultimately inconsistent.

Dr. Dustin Sulak, an osteopath in Falmouth who has treated Gresh, is the founder of Integr8 Health and the medical cannabis education site healer.com. Sulak, a proponent of using cannabis for chronic pain, said he noticed more than 10 years ago that some patients were using the drug as a substitute for more harmful substances.

“Opioids are a good medicine. They’re an effective treatment for pain, but they’re not great for chronic pain, and many people are reluctant to start on opioids,” he said. “Over time, they tend to stop working – they can cause dependence and a number of side effects.” In December, Sulak published results of his own 2016 study in which 85 percent of the 525 Integr8 Health patients surveyed reported a decrease or cessation in their opioid use when using medical cannabis. The results were published in the Cureus Journal of Medical Science, an open-access general medical journal known for its use of crowdsourcing in its peer-review process.

The survey also found that 40 percent of patients reported ceasing all opioid use, 48 percent experienced a decrease in pain of at least 40 percent, and 87 percent reported having an improved quality of life.

“These valuable findings confirm the important role that medical cannabis, along with proper dosage education, can play in the reduction of pain and helping those suffering from opioid dependence,” Healer co-founder and CEO Brad Feuer said in a statement.

Like Sulak, researchers Kevin Boehnke, Evangelos Litinas and Daniel Clauw conducted an online survey in 2016 into whether medical cannabis changed individual patterns of opioid use, and their findings were similar to Sulak’s.

Survey responses indicated a 64 percent decrease in opioid use, and fewer and less-severe side effects of medications, they said. Forty-five percent of respondents reported an improved quality of life.

“This study suggests that many chronic pain patients are essentially substituting medical cannabis for opioids and other medications for chronic pain treatment, and finding the benefit and side-effect profile of cannabis to be greater than these other classes of medications,” the authors wrote. “More research is needed to validate this finding.”

In January, Canadian researchers with the University of Toronto, University of Montreal and Toronto General Hospital, among other affiliations, published a study that found almost half of the participants using cannabis for chronic pain reportedly decreased their opioid use, from 40.8 percent at the start to 23.9 percent after 12 months.

However, in 2018, a four-year Australian study funded by the country’s government and national health and medical research council found that while cannabis use was common among people with chronic pain who were prescribed opioids, there was “no evidence that cannabis use improved patient outcomes.”

In fact, “people who used cannabis had greater pain and lower self-efficacy in managing pain, and there was no evidence that cannabis use reduced pain severity … or exerted an opioid-sparing effect,” the study stated.

The researchers stressed the need for large, well-designed clinical trials.

Researchers have looked at statistical data on groups of people to see whether legal access to cannabis is linked with changes in opioid use, or with changes in harm associated with opioids. Those findings have, again, been inconsistent and sometimes contradictory.

So can cannabis help in the fight against opioid addiction? It remains an open question. “We have a lot less data on the use of cannabis as a treatment for opioid use disorder,” Sulak said.

There couldn’t be a better time to start the research. Maine recorded its worst year ever for drug overdoses in 2020 with 502 deaths, and preliminary figures indicate the numbers are still rising.

According to the NIH, roughly 21-29 percent of patients who are prescribed opioids for chronic pain misuse them. Sulak believes the problem was created by the medical field, and therefore is up to the medical field to fix.

But according to Dr. Merideth Norris, an addiction specialist based in Kennebunk, “the idea of using cannabis as medication-management therapy isn’t really there yet. … It  hasn’t met the standard, research-wise, for pharmacotherapy.”

However, that doesn’t mean the possibility should be discounted, she said. 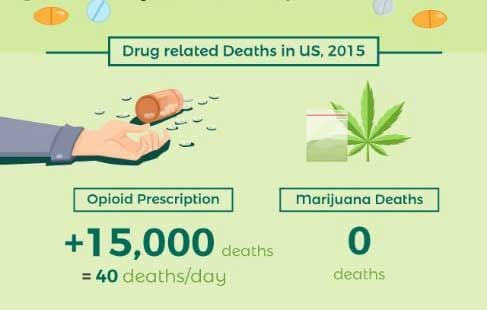 In Norris’ experience, recovery is more than just weaning oneself off the drugs. How to deal with emotions is a large part of it, she said, and moving from one mind-altering substance to another, albeit a less deadly one, is often not addressing the root of the problem.

For patients who start using cannabis after struggling with opioids, she doesn’t immediately treat it as a relapse. “I do see people who do very well, who want to avoid using opioids who can use (cannabis) very effectively,” Norris said. “If you have chronic pain, you shouldn’t have to choose between your sobriety and your misery.”

Norris is wary of cannabis as an actual treatment for substance use disorder. The situation is especially delicate for people newly in recovery who might not be able to tell the difference between true recovery and merely feeling better on the surface because of a mind-altering substance, she said.

“There are a lot of moving parts,” Norris said. “This is why medicine is hard. There are many paths to recovery, but the best approach to recovery is that one that allows you to stay alive.”

The use of CBD also shows some promise in the fight against the opioid epidemic.

In a 2019 study, researchers from Mount Sinai Health System in New York City found that in a clinical trial, participants who received a dose of CBD showed reduced cravings for heroin and reduced anxiety, which lasted for about a week.

Thomas White said that he understands all too well “the all-consuming cravings that can come with early recovery.” In recovery from alcohol addiction for 12 years, White and his son Daniel, who is also in recovery, recently launched Exact Nature Botanicals, a CBD company in Wells geared toward helping recovering addicts. “We focus on issues like curbing addictive cravings, depression, anxiety, (and creating) better sleep,” he said.

An “unabashed” believer in CBD, White said he no longer has that “constant pang of looking for my next high.”

He recognizes that research on the efficacy of CBD for curbing harmful addiction is still being done, and that in many cases the results of such studies are inconclusive. “I don’t hold it out as a panacea that will cure addiction,” White said, but he still believes CBD can be used as part of a comprehensive treatment plan to get sober.

With a clientele struggling with substances that can intoxicate a person, White said he stays away from THC products in his shop. “I don’t want people depending on substances that continue to get them high,” he said.

That’s why White believes in cannabidiol. “I think it can enhance the current therapies,” he said. “None of these studies say CBD is a magic drug, but findings suggest it could play an important part.” He added: “Any road that leads you to recovery is a good road to take.”