The Beautiful Colours of Cannabis

A Rainbow of Cannabis: What Different Colours Tell Us About a Strain

Long before cannabinoid testing began, customers made their choices mostly based on smell and colour. After that, taste and of course potency. Even today, with all the knowledge we have available when making our weed purchases, there is nothing more appealing than a jar of colorful buds.

So where do those amazing bud colors come from? In a word, anthocyanins.

What Factors are at Play?

Anthocyanins belong to a parent class of molecules called flavonoids and are synthesized via the phenylpropanoid pathway. They occur in all tissues of higher plants, including leaves, stems, roots, flowers and fruits. They are odorless and moderately astringent, and can appear red, blue or purple according to their pH. 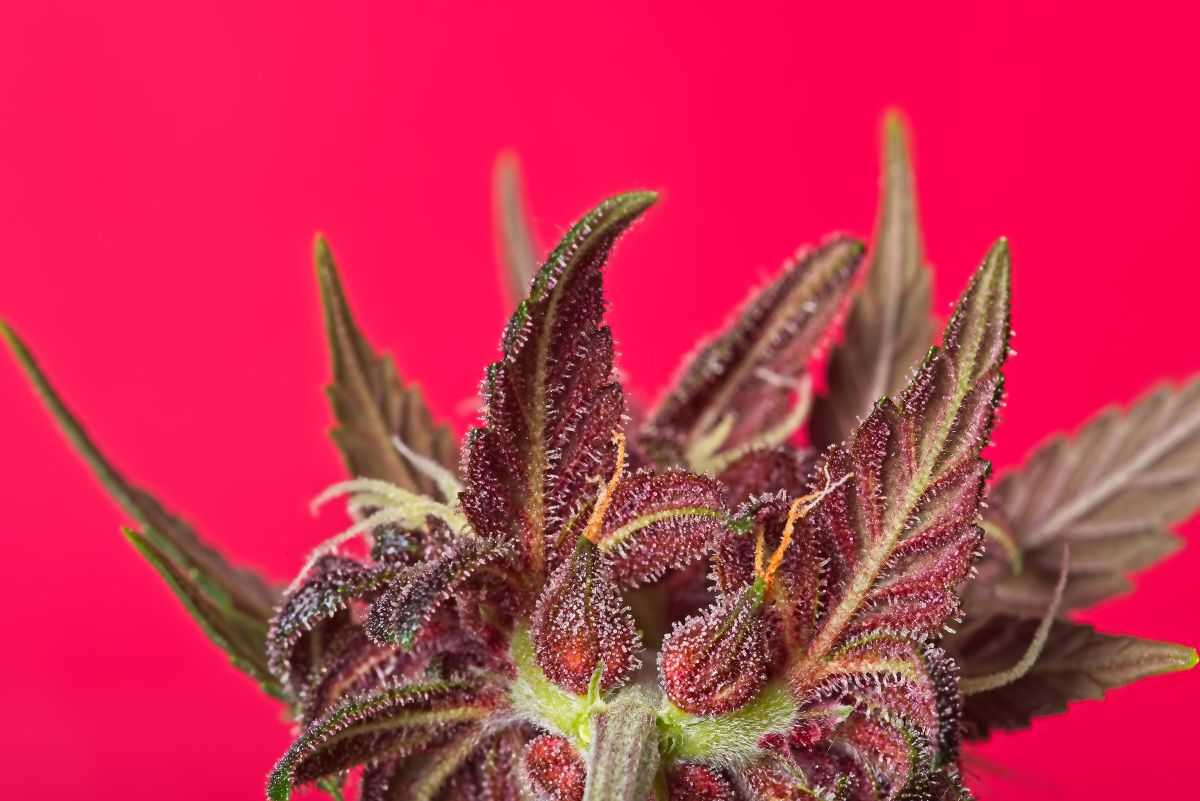 Think of tree leaves in fall. As the temperature drops, they change from green to red, orange, yellow or gold. The same is true for cannabis: once the green fades, the colours appear.

Temperature plays a vital role too. Chlorophyll is the plant component vital to photosynthesis and cooler temperatures inhibit chlorophyll production. For cannabis, depending on the lineage of the strain, certain colours can appear when you drop the temperature and the light cycle shortens, simulating a change in season.

The ideal range to grow cannabis is a pH of 5.5-6.5, however, during flowering, you can lean one way or another to enhance or minimize certain anthocyanins to bring out certain colors. Additionally, different strains of cannabis come with different cannabinoid ratios, flavor profiles and anthocyanins.

Anthocyanins can be present in plant tissues, leaves and flowers. Sometimes, they even present in the trichomes themselves, which are the hairs or fine outgrowths or appendages on plants. They also can attract pollinating creatures like butterflies and bees, while deterring pests.

Does Colour Have an Impact on Quality of Bud?

A common misconception is that strains with bold color are more potent. The truth is that colour has nothing to do with potency.

In fact, buds that have been grown and harvested to their maximum potential can be so covered with trichomes that they almost appear white. Trichomes are packed with cannabinoids and terpenes so these flowers can be quite potent. White Widow or White Rhino are two strains with a propensity to become encrusted with trichomes. 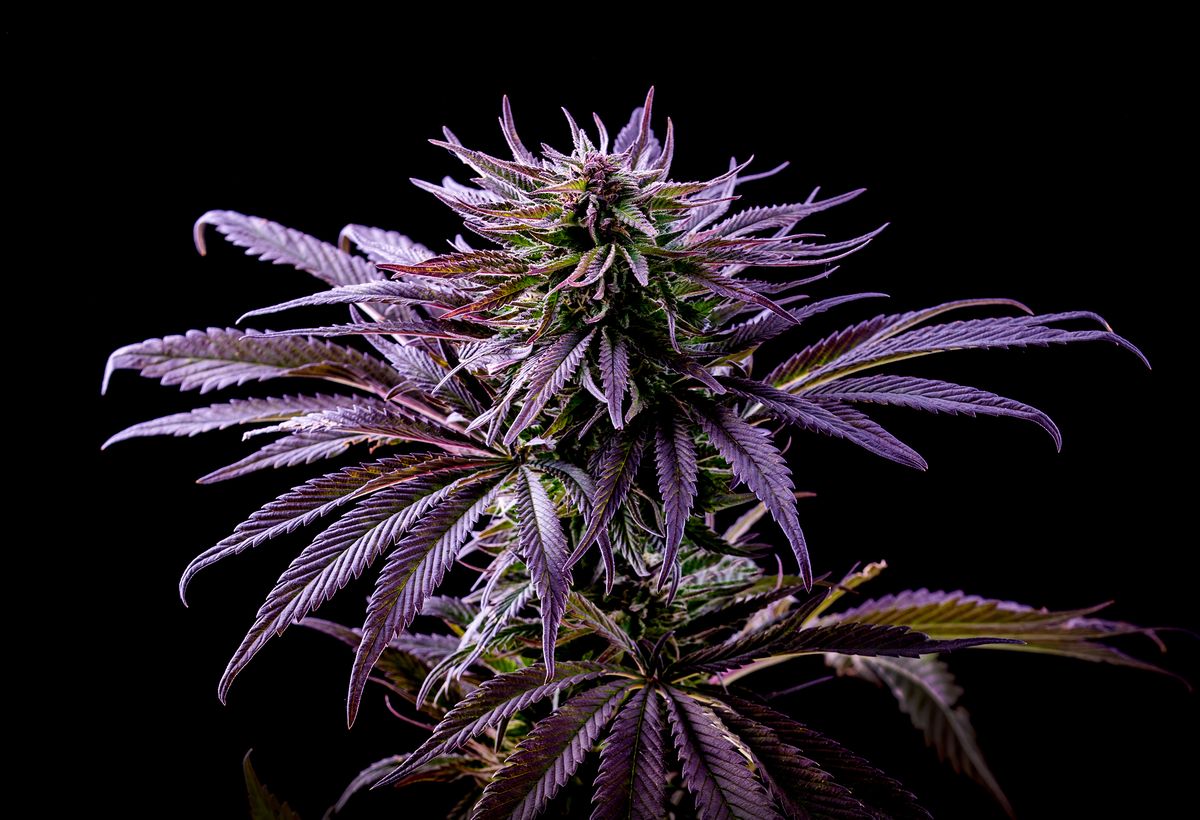 However, anthocyanins are known to act as powerful antioxidants and are also thought to have analgesic, anti-inflammatory and neuroprotective properties. So while the presence of anthocyanins doesn’t change the potency of cannabinoids like THC levels, it might give the strain an added entourage effect on health.

Other plants high in these molecules include blackberries, blueberries, raspberries, goji berries, blood oranges, and cranberries. Cranberries especially are touted for their powerful antioxidant properties, due to anthocyanins.

Strong and vibrant color also indicates that your cannabis is at its peak freshness, taste, and potency.

But what about the actual colour? Do different colours provide different effects? Your cannabis can come in a rainbow of colours, and yes, different shades can determine varied effects, taste, and even smell. 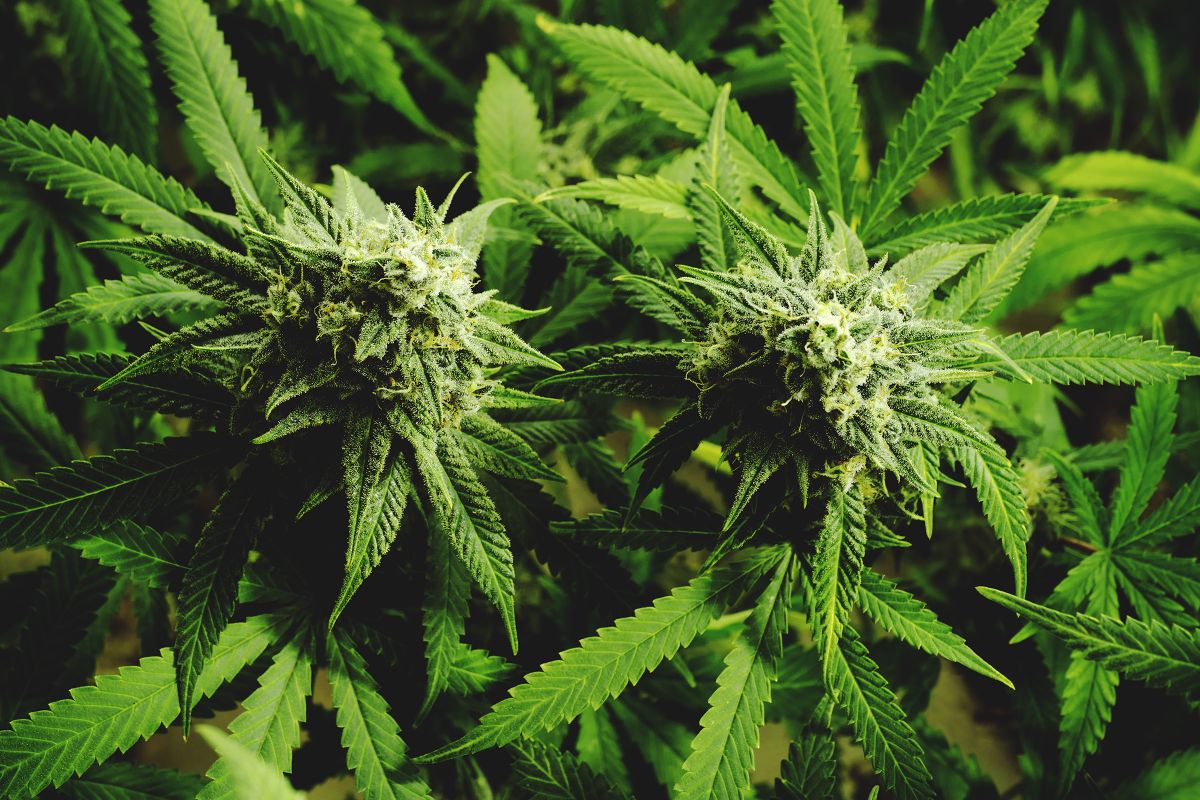 Green is the predominant colour of most flowering plants including cannabis because of the presence of chlorophyll, the pigment that absorbs sunlight (except the green wavelengths) to power the process of photosynthesis. Through photosynthesis, plants combine carbon dioxide and water to create sugars that fuel all biological functions.

Often, plant tissues will have so much chlorophyll that its green color masks the presence of other pigments. But as summer turns to autumn, lower temperatures inhibit chlorophyll production, allowing the other pigments to emerge and produce colorful marijuana. A similar phenomenon can be observed in deciduous trees as their leaves change color and fall.

Cannabis flowers that are purplish to shades of blue are generally high in anthocyanins. More than 500 anthocyanins have been identified, with colors that can range from red to purple to blue depending on pH. 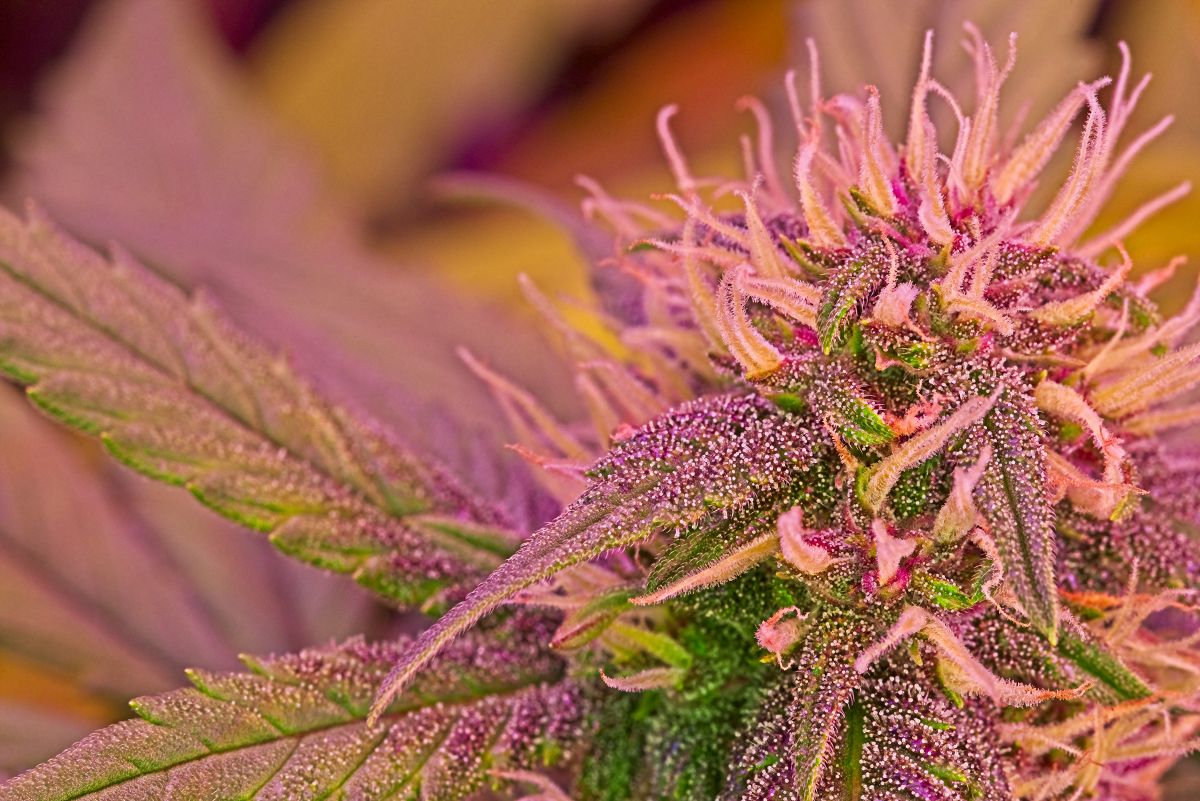 Anthocyanins can produce colourful marijuana although they are generally not abundant in young plants but are produced as plants mature. Fruits and vegetables high in anthocyanins include blueberries, açaí, raspberries, blackberries, eggplant, and purple cabbage.

Purple strains of cannabis are very popular, including Granddaddy Purple, Purple Haze and Purple Alien. Some strains such as Black Diesel and Vietnamese Black can be so high in anthocyanins that they are nearly ebony.

Red and pink varieties are relatively rare and include Red Poison, Red Dragon, Pink Panther, and others. Reddish leaves or buds can also be caused by a deficiency of phosphorous, an element vital to plant physiology.

Carotenoids are another group of pigments that can influence the colours of marijuana. They are created by plants, algae, and photosynthetic bacteria. Beta-carotene, lycopene, lutein, and zeaxanthin are among the more than 750 carotenoids have been identified. 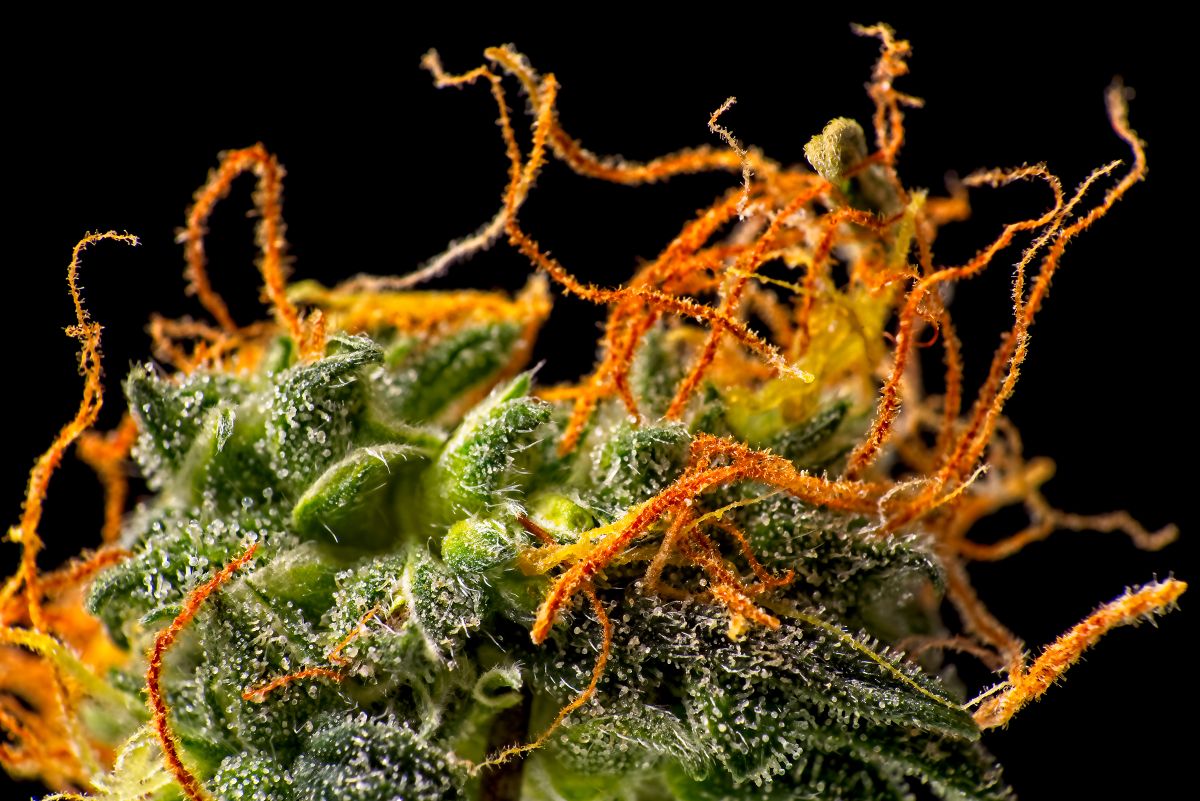 Some carotenoids in the diet, including beta-carotene, alpha-carotene, and beta-cryptoxanthin can be converted by the body into Vitamin A. Carotenoids are important for eye health and provide protection against blue light and macular degeneration.

Carotenoids produce the yellow, orange, and red hues that are found in many plants including carrots, squash, sweet potatoes, pumpkins, and tomatoes. Plants grown in alkaline soils with a pH of 5.0 or less can have a greater abundance of carotenoids.

Many flavonoids are also yellow and can influence the colours of marijuana. Nitrogen deficiencies during growth can also cause cannabis leaves and buds to appear yellowish.

Strains with orange or yellow flowers include Orange Cookies, Lemon Kush, Grapefruit, Nectarine, and Olive Oyl. Many varieties of cannabis will have orange or red pistils, or hairs as they are commonly known.

Buds that have been grown and harvested to their maximum potential can be so covered with trichomes that they appear white or frosty. Trichomes are packed with cannabinoids and terpenes so these flowers can be quite potent. White Widow and White Rhino are two strains with a propensity to become encrusted with trichomes. 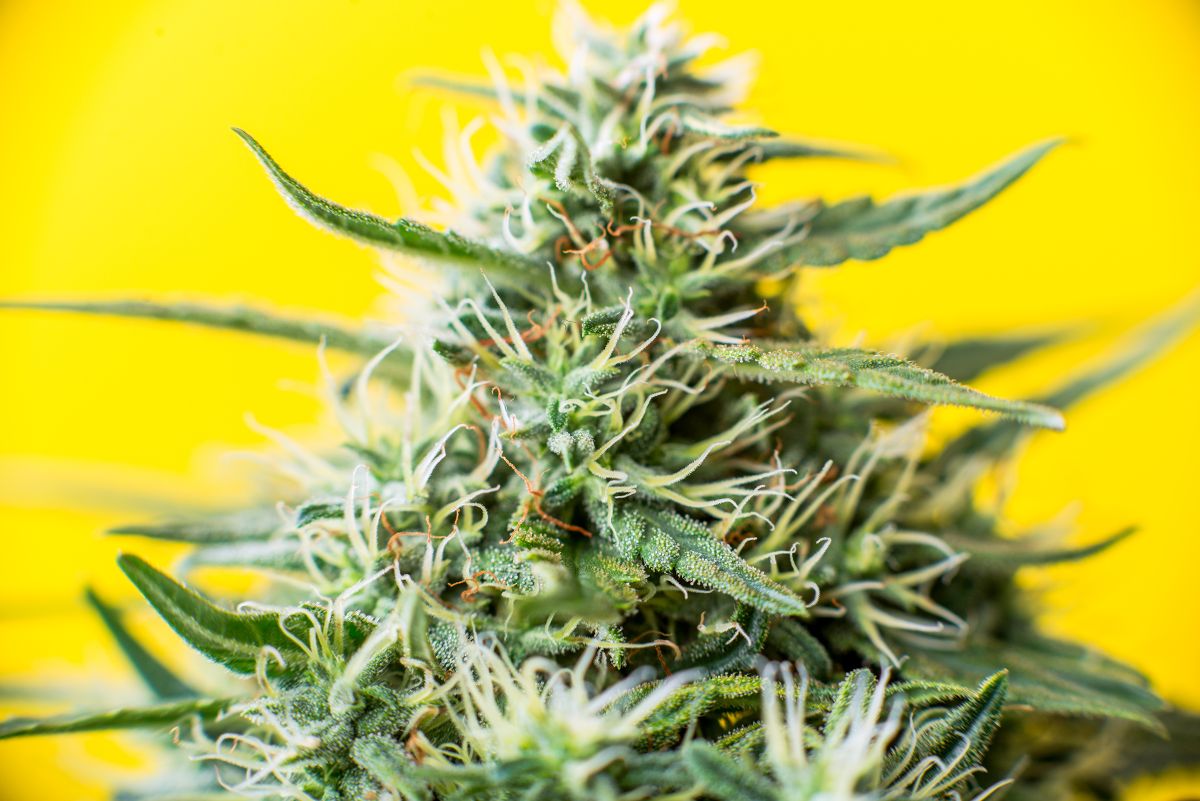 Colourful marijuana can be attractive or even visually stunning, but other than white buds glistening with shiny trichomes, hue is usually not a reliable indicator of potency.

But if you are consuming your bud orally in tinctures, oils, edibles, or capsules, you may be getting the nutritional benefits of carotenoids, anthocyanins, and other flavonoids.

Anthocyanins have shown some activity at CB1 and CB2 receptor sites and may have a synergistic, or entourage, effect in conjunction with cannabinoids and terpenes.

But even if they don’t get you higher, different marijuana colours can add aesthetic appeal and a sense of adventure to your next bud purchase. Which colour of the rainbow will you choose next?

Click here if you’re trying to decide between smoking or vaping your cannabis.

Article by Kate A. Miner from EverCannabis.

Enjoy 10% Off All Flower Every Sunday with Promo Code FUNDAY10FLOWERS